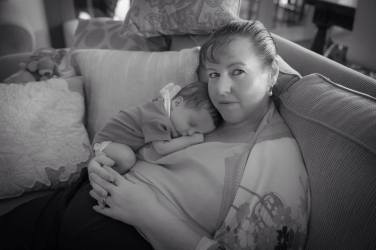 Growing up I always assumed I’d get married then have kids.  I got older, went to uni, lived overseas and in my early thirties started to think it might not be a case of when I get married but if.  That was quiet challenging to even think it might not happen.  I actively made the decision to come back from overseas at 32 because I wanted to raise a family in Australia.   Shortly after I arrived home, I hooked up with a guy that was 13 years older than me, I was 33 and he was 46.   He’d had a vasectomy and yet I entered that relationship and was in it for six years.  The first two years I thought I could change his mind about kids, the second two years I thought I could change my own mind and the last two I spent working my way out of the relationship.

By that stage I was 39 and in my head, I still thought if I wanted to get pregnant I could.  I never wanted to have kids on my own though.  I met Pete my now husband and after a brief period together fell pregnant unexpectedly.  Pete was really excited and had started to look at baby names when I miscarried at seven weeks.  Because it hadn’t been planned we were more shocked then saddened but made the decision shortly after to try and get pregnant. I was 40 and Pete was 41.   Our gynaecologist recommended IVF because she’d discovered I had two uteruses and only one could carry a full-term pregnancy.

The process of IVF for me was actually ok, Pete overcame his fear of wanking in a cup, I managed the needles and afterwards they said we had five eggs but only four were mature.  When they rang to say none had developed, I found that absolutely shattering.  That was the hardest of it all.  I thought if IVF was our last chance and it hasn’t worked, we can’t get pregnant.  That’s when I started thinking we’re not going to have kids.  We sat on that for about six months and even though Pete and I both believed we were enough for one another we decided to give IVF one more try.

I collected $8000 of non-refundable IVF medicine and once it was in our fridge at home received a phone call to let me know I’d fallen pregnant naturally with Erin.  Because we’d had a blighted ovum and miscarriage prior to Erin, I didn’t allow myself to relax until around the 18 to 20-week stage.  We knew at that point there were no developmental issues they could pick up on and had been told everything looked great. I had had the perfect pregnancy, I had no morning sickness, I had a little bit of indigestion, I was travelling to Melbourne every day, lost a little weight and was feeling fabulous.

During the 20-week scan, just when I was thinking how we’d made it half way, a last minute internal scan though showed my cervix was funnelling.   A couple of days later I went in for a stitch and the Doctor said without it I would’ve lost Erin the same week.  I was put on modified bed rest and Pete and I got married a couple of weeks later.  The stitch had been holding really well when Erin decided at 28 weeks to kick her way through.  Pete got there just as I was getting wheeled in for an emergency caesarean.

They put a screen up and lifted Erin above briefly for us to see before they rushed her into intensive care.  Pete went with Erin and I got sewn back up.  Everything is a bit of a blur for me and I don’t know if it was the drugs, or me just compressing everything down.  My father went down and saw her and said she looked lovely.  I remember thinking she can’t look that lovely because she’s not meant to be here.  When I told a nurse later that evening I hadn’t seen her yet they wheeled my bed down and it was really good to see her but it was really awful too.

I actually felt really guilty, really bad like it was my fault she was here because I couldn’t hold her and then when I couldn’t breast feed either I felt like I couldn’t do anything. I held her five days after she was born.  I’d express for 40 minutes and had bruises on my breasts for 15 mls. I was on medication to increase my milk, I was having the lactation cookies.  I was feeling sad, disappointed, angry with myself and guilt was the biggest one, guilty. Logically I knew it was not my fault and logically I knew I’d gotten her to 28 weeks and logically I knew even getting pregnant at my age it was almost an immaculate birth anyway.  All of those things I knew logically but I still felt awful.

Pete bonded with Erin straight away but it took me longer, it can take weeks to bond and that was one of my worries.  I said this to a nurse who responded that the fact I was worried was a sign I was bonding.  We spent thirteen weeks in the hospital then Erin was finally discharged at three kilograms.  Erin didn’t have any brain bleeds, we had some respiratory issues but she was able to come off oxygen in time to come home.  When you get away with just having some gross motor skill stuff in your head its always like it could’ve been so much worse and it could be so much worse that how I think.

It’s harder parenting now, it’s like she hit three and thought let’s see how hard you bastards are.  Now I’m sleeping next to her and I’m like this is not supposed to happen.  We never did any type of co-sleeping because I was so paranoid about SIDS.   Now she won’t go to sleep and she carries on for hours unless we do, we lie there and have a cuddle and its nice.  I keep thinking to myself it won’t be like this forever so you know what if I’m lying there with her for a bit that’s ok too.  If you can just go with the flow, the good flow and the shit flow and all of the flows that’s fine.

It is absolutely ok to not feel, or do, or look, or experience everything that you think you should.  Before you have all the information you think, oh I should look this way or should feel this way. I assumed that I would have this overwhelming rush of love for Erin and it would be exactly like this and then it didn’t happen.  It didn’t happen for ages and Pete did have it.  I thought that’s not the way it’s meant to go so that wasn’t quite right. I think it’s been really good people like Constance Hall and other people that say this is another picture, an alternative picture of what parenting can be.