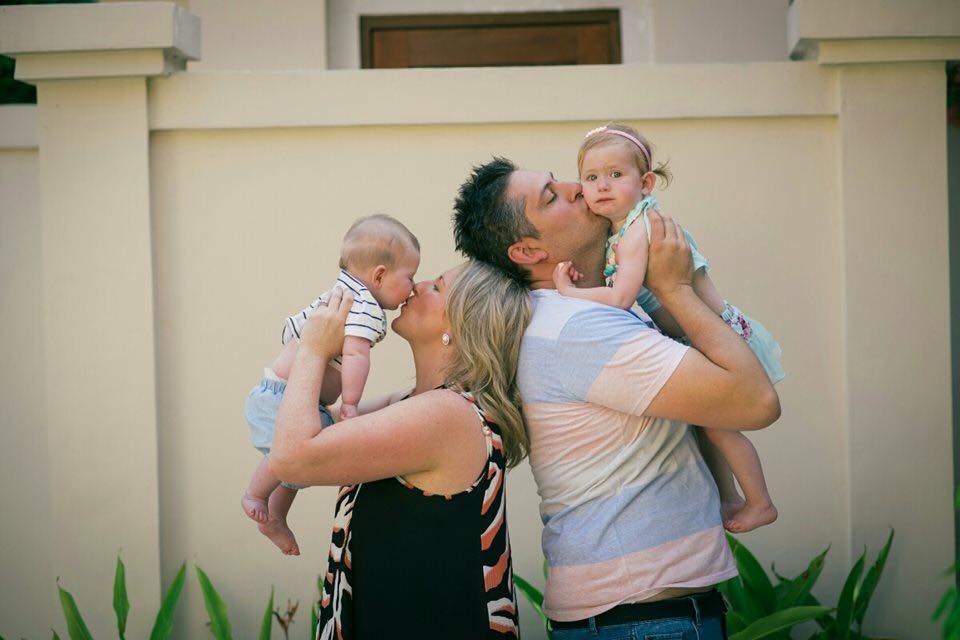 Jarrod and I were together for five years when we separated. I was 25 and even though we knew we loved each other, it wasn’t time to settle down. Three years later when we got back together, we knew it was marriage and kids time. My mum was 34 when she went through menopause. She had no idea it was coming, back then you didn’t talk about that kind of thing. Jarrod and I knew we had a time limit for kids because early onset menopause was going to be a factor. We struggled to conceive with Zara and after a year of trying we went to see our obstetrician. One of the first things he did was a count to see how many eggs I had, I was on the low end back then in 2013. I would’ve been 31 when I first saw him. He also did a laparoscopy and found that I had endometriosis that I never knew I had. He said it was completely covering my walls and that’s why I wasn’t pregnant.

We were building this four-bedroom house in the hope that we would have kids. The day our frame went up, we found out we were pregnant with Zara. It was one month before we were due to start IVF. At that stage my eldest sister had unfortunately lost a baby in utero at 20 weeks. Having lost her little boy, that’s how we found out we have a blood clotting disorder called Factor V Leiden (FVL). A blood clot formed in my sister’s umbilical cord and that cut off the oxygen to her son. As soon as I found out I was pregnant I got tested and had to start Clexane. I inject myself every morning in the tummy and for six weeks’ post birth. The first time it was quite hard, Jarrod was there with me. I would put it in then take it out, I just couldn’t do it, now its second nature. I loved been pregnant with Zara, it was easy apart from a little morning sickness until eight weeks.

For Zara’s labour, I went in with a birth plan typed up in colour. It had everything to do with lighting, music, the whole experience. I was thinking it was going to go exactly to plan but I didn’t even get that out of my bag. The labour itself was pretty stress free but as we got further along her heart beat dropped. I tried pushing and just couldn’t get her head out. At that point they called the doctor and said you need to come in now. Five minutes later he was there with forceps and an episiotomy he got her out straight away. I had an epidural with Zara, I’d had gone in thinking all natural, no drugs at all. I had a lot of preconceptions that people see it as a failure, there’s such a bad stigma around it like breast feeding. I was so relived after though, I actually slept throughout some of the labour. When Zara was born, she cried, fed and was absolutely fine. It was after that I had the feeding issues. I was told by a nurse that if I was to feed her I would have to wear a nipple shield. I was so embarrassed about having to wear one, that I just expressed all the time because I didn’t want to feed in public. I did that for six months and always said to myself if I express less then 100 mls in a day I would stop. I remember the night I only got 90mls, I just balled my eyes out. I tried to remind myself she had to be fed and I tried.

The first four months Zara was waking once a night. We got to the four-month regression and that’s when her sleep went downhill. We started implementing changes that probably made things worse instead of letting her work things out. Then we got into really bad habits like feeding to sleep, rocking to sleep, putting her in her cot asleep. At one stage, she had four dummies in her cot. At that point I didn’t know what sleep deprivation was like. It definitely tested mine and Jarrod’s relationship. There was a phase where she was waking seven or eight times a night so that’s a strain, that’s when you bring your bad habits in and question everything you’re doing. Because I had nine operations on my ears as a child, mum had an inkling that something may have been wrong. She said Zara’s temperament was very similar to mine, so restless, never liked laying down and didn’t seem quite right. One day when Zara was under a year-old mum suggested we get a referral to see a specialist to make sure she didn’t have any of the issues I had. The doctor recommended a hearing test straight away then grommets. She had her first lot put in when she was 15 months old and started walking that day. A month later she was religiously sleeping through the night.

I always knew I’d take twelve month off work with Zara so she went into day care at 11 months. I went back full time because I was already pregnant with Levi. She was really emotional at drop offs and I hated that whole process but financially I knew if I went back for four months, I would get a year’s maternity leave again. I didn’t realise how much I would enjoy going back to work. That’s before that you go through the whole guilty thing, you feel like someone else is raising your kids. Zara was getting sick all the time, I felt like I was at work one or two days a week because Zara was constantly sick. I was getting calls from day-care all the time to say she needs to go home she’s got a temp. I was lucky to have the support from Jarrod but when I would see day-care calling I would think I can’t keep doing this. It was so hard juggling being a mum and the pressure of work.

Zara was 16 months when we brought Levi home. At the start, it was ok but then we had settling issues with Levi. Zara learnt if she stuck her fingers down her throat she could make herself vomit. I would come out and see vomit all over her, vomit over the baby gate and vomit on the wall. I made an appointment with the maternal health nurse and she let me know at that age, it was an attention thing. One of the hardest challenges to date was not being able to console her after being told to ignore it. It felt like an eternity but in reality, it was probably a month or so before she stopped. I feel like I probably got some kind of depression with Levi because I was struggling so much. With Zara, I left the house all the time and was happy to do stuff but with Levi I was almost embarrassed like the second time around I still didn’t get it right. My worst days were probably when Levi wouldn’t settle, Zara was making herself sick, she’s crying, he’s crying, I’m crying and I couldn’t see how things were going to get any better.

I felt like I didn’t want to be a mum anymore and I felt like I wasn’t really useful for our family. On one of my darkest days actually I went to the toilet and just needed to cry. Zara opened the door and said why are you crying and I said mummy just needs a minute. She said is it my fault and that just broke me. She got me toilet paper to wipe my eyes and I thought from that point on I don’t want the kids to see me upset. That in itself was a turning point because I would never want my children to think they are the reason I’m crying. I think sometimes as hard as it is you have to hold yourself together for them. I went to the doctor and told him that I thought I may have depression but he thought it was just sleep deprivation. He was adamant I just needed sleep. I knew at that stage though after 11 months I needed some kind of help. That’s when we tried sleep school with Levi and the funny thing was, as soon as I got sleep I felt normal again.

When Levi was 11 months old I started feeling sick on the drive home from work. I remember saying to Jarrod I’d done a pregnancy test and he was so shocked I’d done one. I told him I wasn’t pregnant and five minutes later looked again and it was positive. I was flashing back to the dark days and wondering what if it happens again? I think this time around if things aren’t working I would be more open to ask for help. I remember being embarrassed to go to sleep school, I thought they’d all be first time mums thinking how could I not have learnt the first time whereas most of them were second time mums. When you’ve got two kids screaming, you lose all your confidence and you lose all of that rational thought just to go, ok it’s just a bad day not a bad life. I’m much more confident now being pregnant with baby number three. I think each baby you learn something because they’re all so different and they give you different kinds of challenges. Now Zara is able to engage it’s just beautiful. The giggles, the hugs, when she says I love you. I really do think this time around I know it’s hard but I also know it’s so amazing. To bring another family member in we’re so lucky. We’ve already got two beautiful healthy kids and to add a third one to that I think it’s nothing but a blessing.

Ebony Knights
Mother to Zara, Levi and bub to be